Already it has been two months since that big sweet polar bear of a dog of mine died.  You can't have chickens here without a dog and they are disappearing one by one, including Davy Crockett. She was one of our first chickens, so named by Beantown.  I knew I would have to make some sort of decision soon. I put the word out, but wasn't finding what I was looking for.  The reason being, I was looking for Strider. Just writing this makes me cry.
I knew if I got a dog I would need a smaller one.  I just can't wield a big dog anymore. Honestly with this leg problem I've been having, I wasn't sure how well I'd  even manage a smaller one.  I didn't mind adopting one, but it is such a risk, knowing if they'll tolerate the chickies girls instead of thinking they're drive through chicken dinner.  It was just one more thing wearing on me.
I finally decided that it was long weekend and on Monday Handy Man and I would take some girls to Rae and the rest to Drummer Boy, while we still had some to give and then  pass this chicken raising on to them.
I don't why, but for some reason I decided to click on the pound's website one more time. As soon as I saw this guy, I was smitten.  We went to visit and you could just drown in those big liquid brown eyes.  All the other dogs were barking and dancing and this boy was just sitting there, looking at us with an, "It's about time you got here," expression.
He was calm and sweet and they knew quite a bit about him. The story is someone was raising Mountain Curs and German Shorthair Pointers. One of each got tangled up and when the puppies were born, their stepping out was discovered. The owner planned to get rid of them. Some soft hearted soul took the litter and here was the runt.  He is three months old. They told me he was shy and timid and needed socializing. Well, he might seem shy, but I believe he has a brave heart and the softest, silkiest ears. 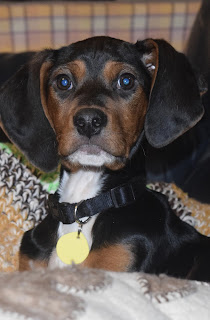 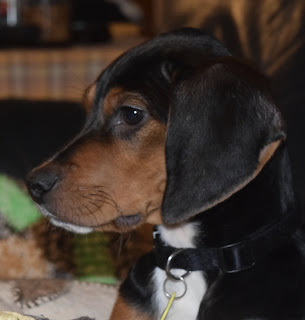 Mercy, I don't even know how anyone can be as talented as I am at creating rotteness in three short days, but here we are.
So far, he seems intelligent. When I open the back door, he waits for me to slip on his collar and does pretty well on a leash. He responds to stop and down and his favorite spot is on mine or Handy Man's chest.
Part of my brood met him tonight. Sorry, no pictures. Between a two year old, three year old and a puppy, the camera got left behind.  So far, he doesn't seem to notice the chickens. I pray that continues.  So at least now I have a reason for getting no sleep. Hopefully, we'll get his little digestion situation settled soon and I won't be up at 2:30 changing crate bedding.  I believe it is a good match. Thank you Lord.
Posted by Gramerly at 5:07 PM 7 comments:

The Valentine Ball was all kinds of fun and treats.  I love watching Missy Bugg Martha Stewart do her thing.  She uses whatever is at hand to costume the little ones up and then makes one game after another to entertain them. She is  my favorite party girl.

You can see a little of the sparkly lights on the door in the back right. That's what the whole room looks like and it's actually dark.  Here Bugg is doing a Hershey's Kiss Walk to the music. 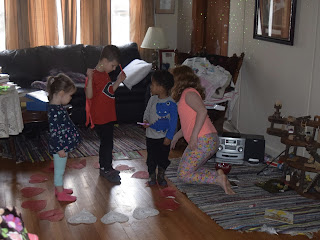 Time for some dancing.

The usual photo fun with some cutesy lips and noses. 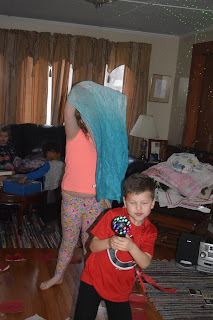 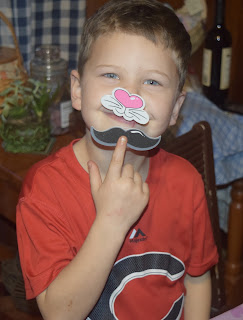 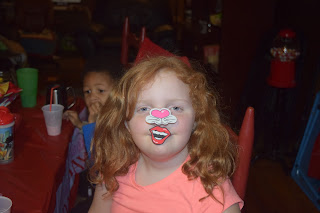 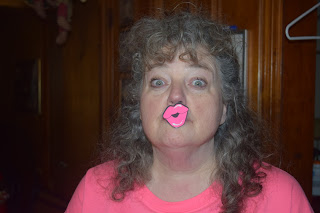 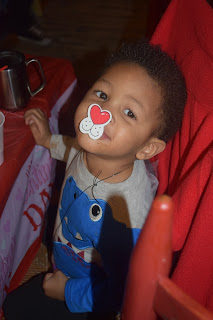 Can you catch these kisses? 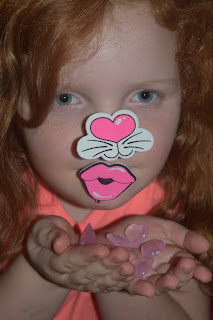 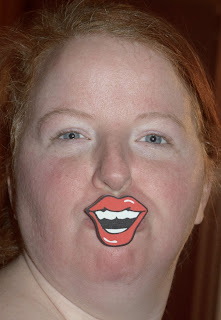 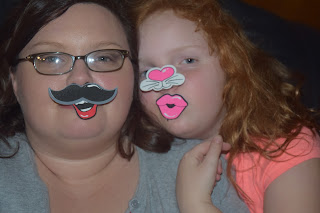 Okay, you happy, I stuck this on here, now take the pictures and leave me to my cool teenagerness please.
Laws, he's handsome. 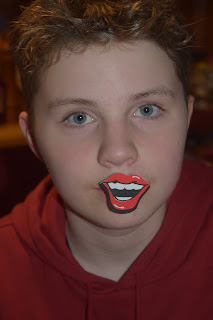 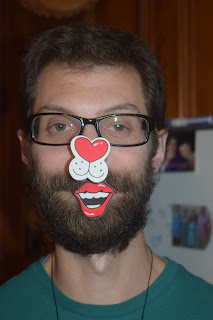 How Do I Love Thee Cardboard Box

Let Me Count The Ways


I love the way that warm brown expanse of surface calls to the two year old and the five year olds, to the girls and to the boys, inviting all kinds of creativity to flow around and about.  Giddy-up spent a great deal of time quoting a favorite book, "The Book With No Pictures."

I love the way your ends open inviting one child at a time to climb inside and scare all the others with their fiercest roar. 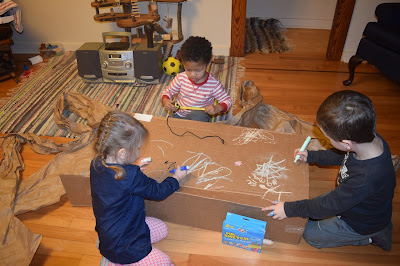 I love the way a simple turn produces a podium, where my fav kindergartner serenades me with a song of all fifty states. 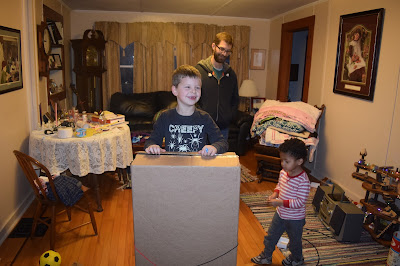 I love how a few snips with the nippers results in tepee house to chill in for a while. 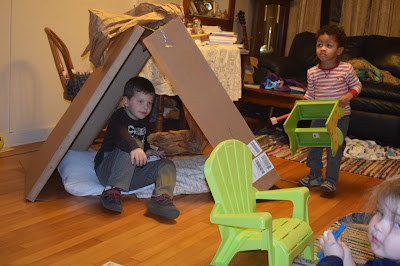 Where else can you get so  much bang for your buck?

Sadly, as I feared, the local critter population have  come to the realization that Strider is no longer on guard.  Lost my beautiful Mil' Fleur Bantam this week.
That bad Loretta Hen has taught her cohorts to find other places to lay.  Ever an egg hunt around these parts.  This chicken needs a bit more tutoring in the art of camouflage. 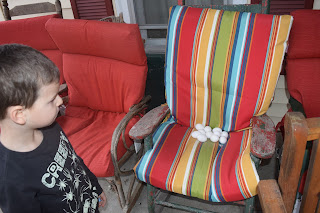 Almost time for the Valentine Ball.  Missy Bugg came over last night to decorate.  I always love to watch her work. 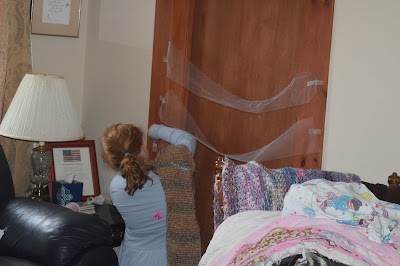 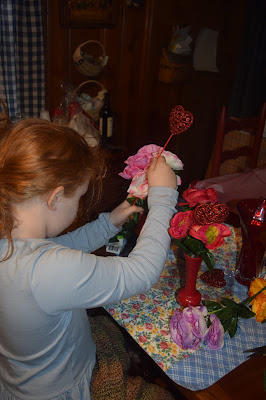 I got a new chicken game, so we took a break mid decorating to try it out. 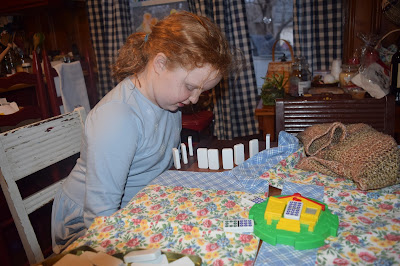 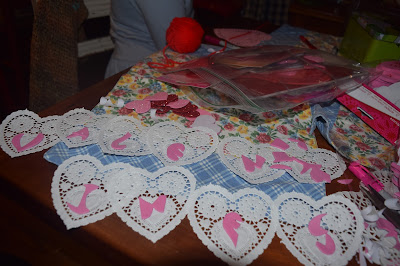 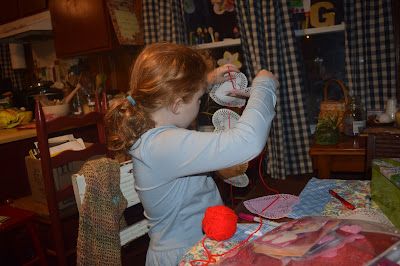 Today was spent at the pool. Not the most comfortable place for a Gramerly at my stage of life- ugh, hot and steamy.  Mr. Bean came in first place in every event except one, took lots of time off.  Missy Bugg had a good workout, as swimming is not nearly as fun as decorating.

Posted by Gramerly at 1:57 PM No comments: