Each year, at the end of January, we celebrate Catholic School's Week.  I think the word "celebration" indicates fun, but this is some fun and a lot of work.  It begins on the Friday evening before with a Family Fun Night. It was fun, but on Friday afternoons, the only thing I want to do is go home. 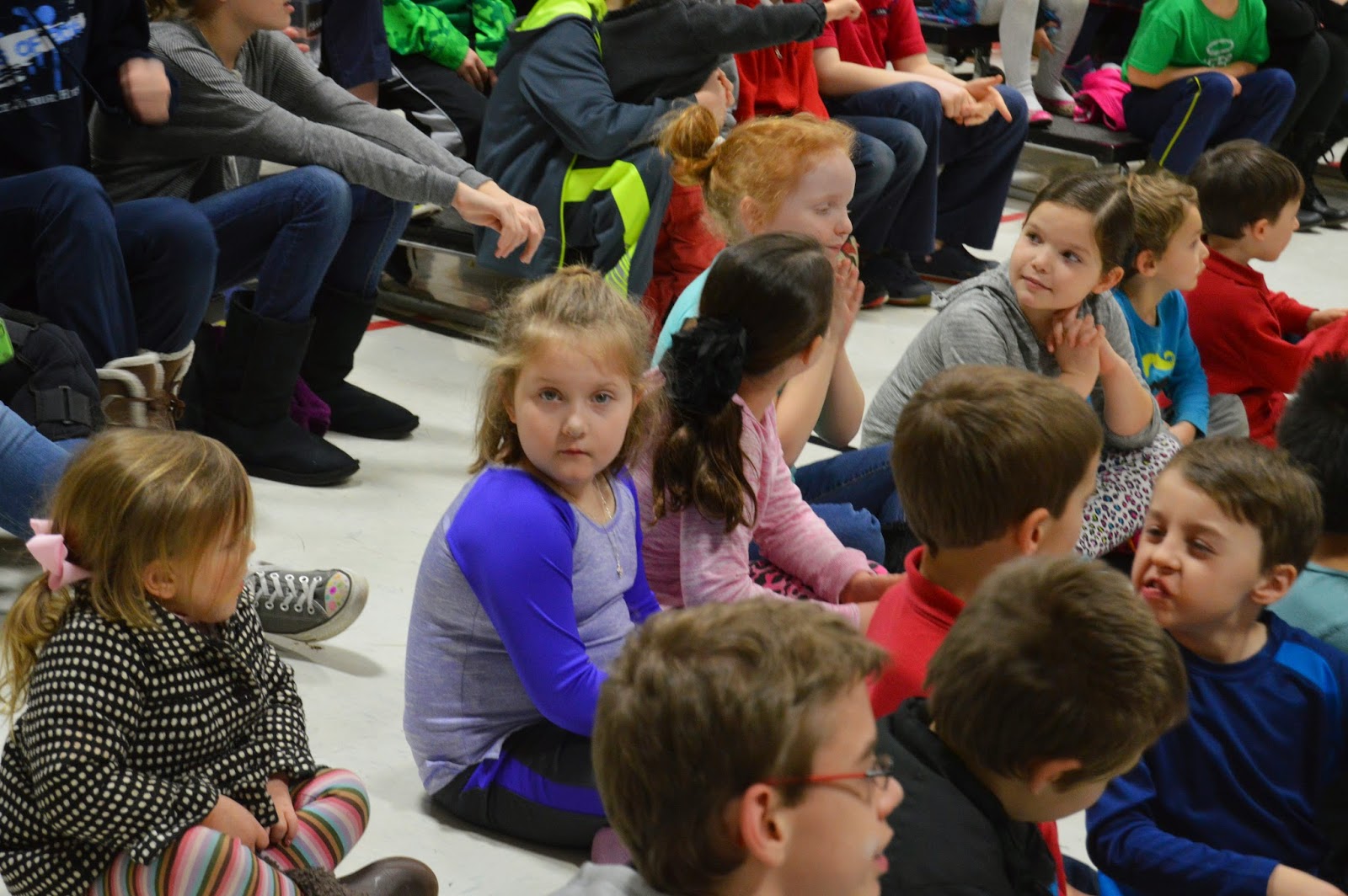 I invited my people 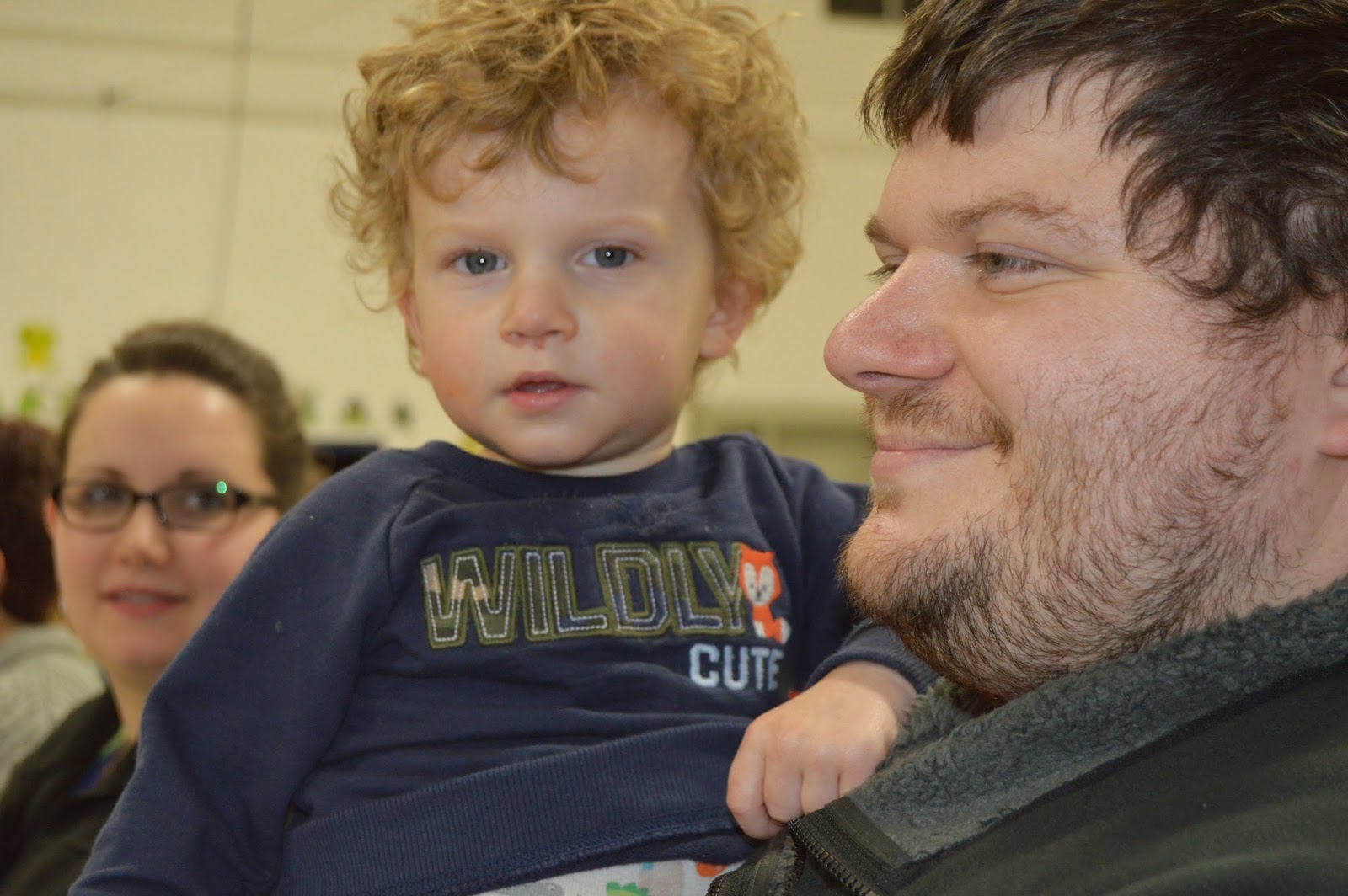 and we all enjoyed a program on the animal species with lots of squawking and writhing examples.  Missy Bugg, Baby Boy, Ol' Henry and Miss Linee got to be helpers. 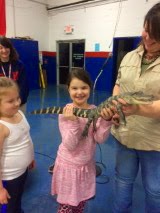 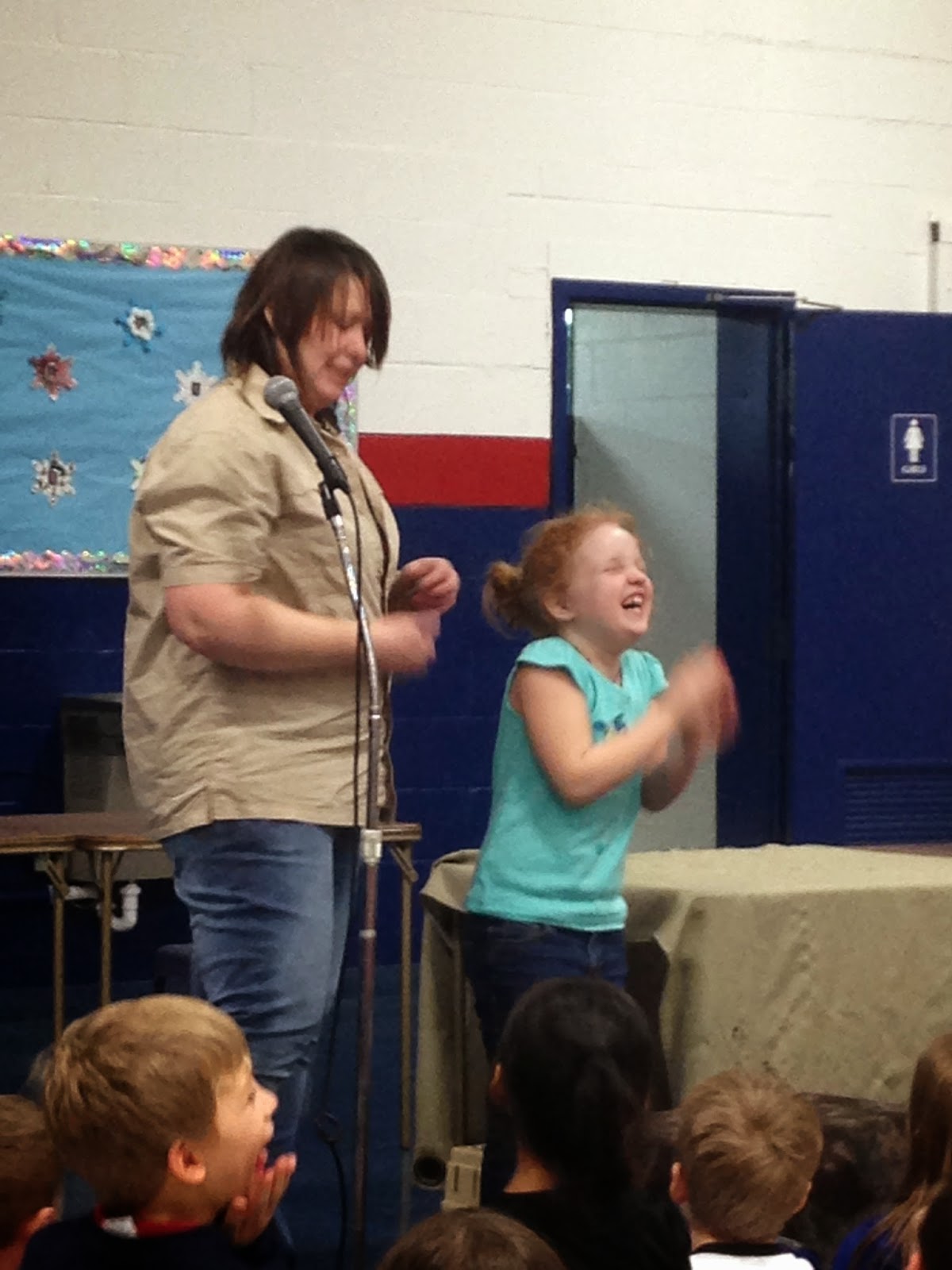 Some of these pictures were captured with phones, as the battery on the school camera died, just as the show was starting.  I'm not sure how you configure them to get a good clear picture. 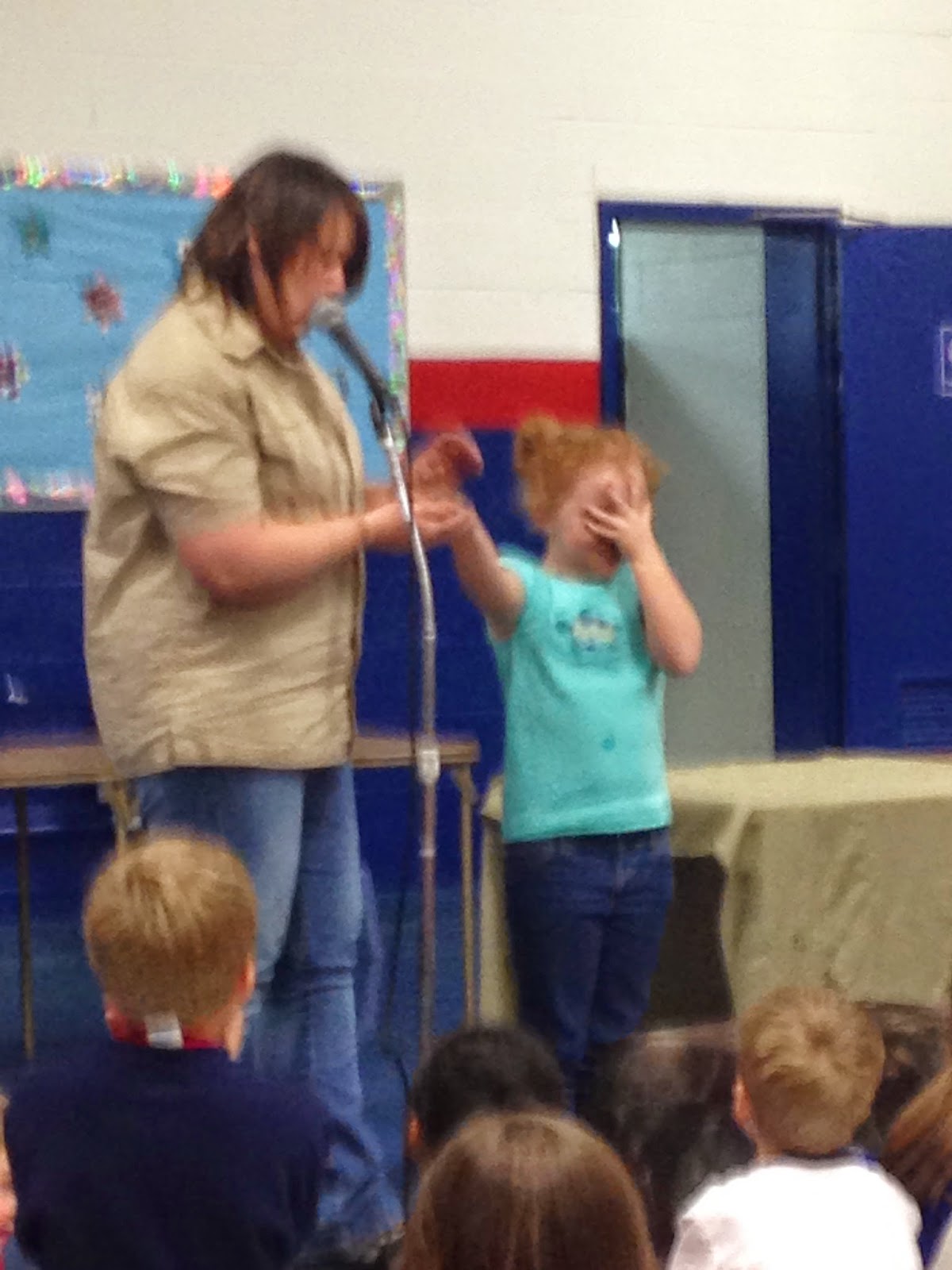 They had critters climbing on them, peeing on them and sitting on their head.  Then they enjoyed playing in my room a while.
After our fun night, we are expected at Sunday's 10:30 mass, followed by an afternoon open house at the school. I found out after school on Tuesday, that the 5th and 6th graders were to sing and sign, which kind of threw my week out of joint.  They did beautifully, and thank the Lord, it was well received.
So, we in 5th grade we've been creating replicas of Revolutionary heroes, knitting, learning about plane figures, writing letters, etc! 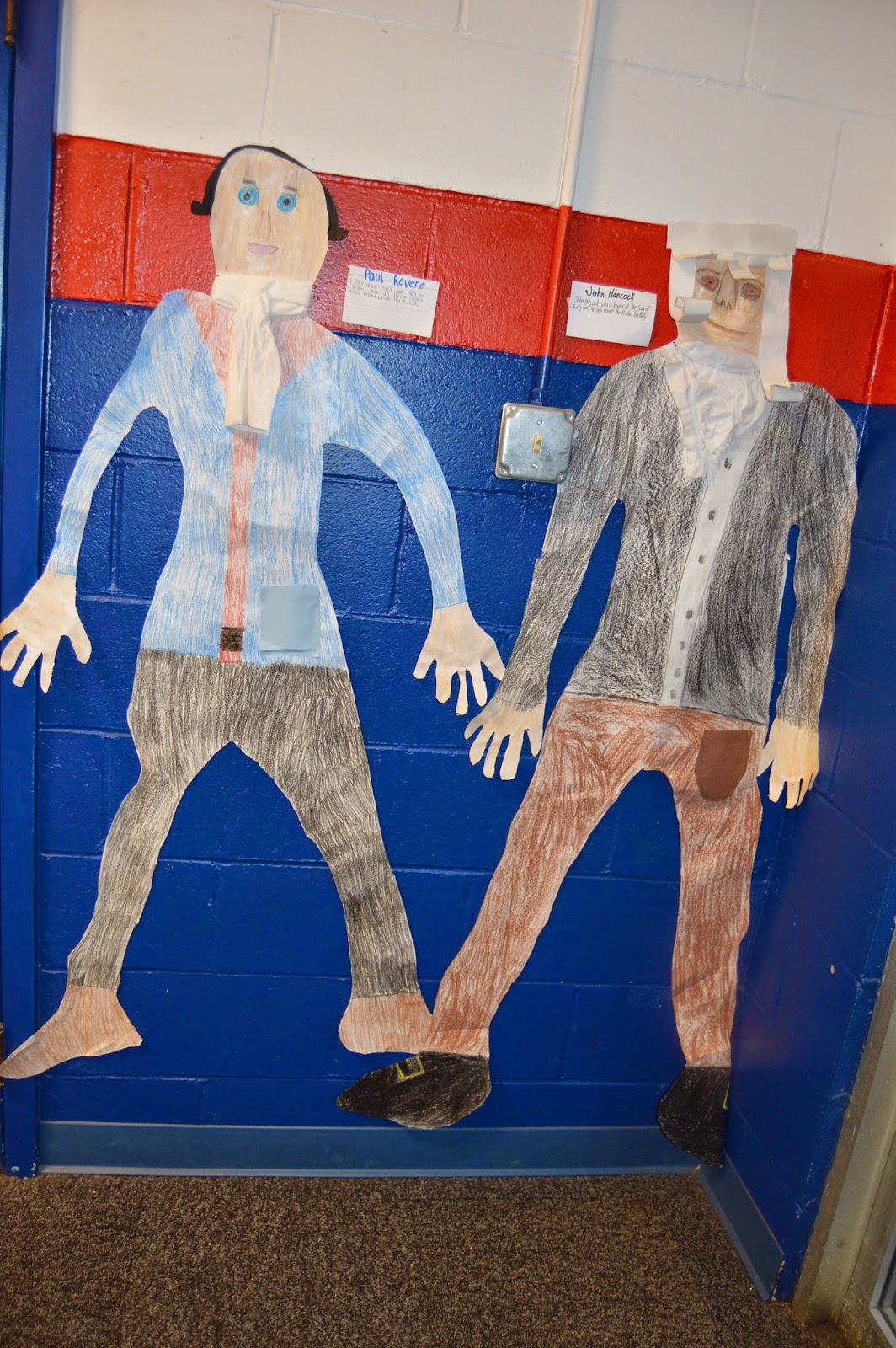 So glad you remembered this project Gardner E.  Not only good practice, but wow, eye popping. 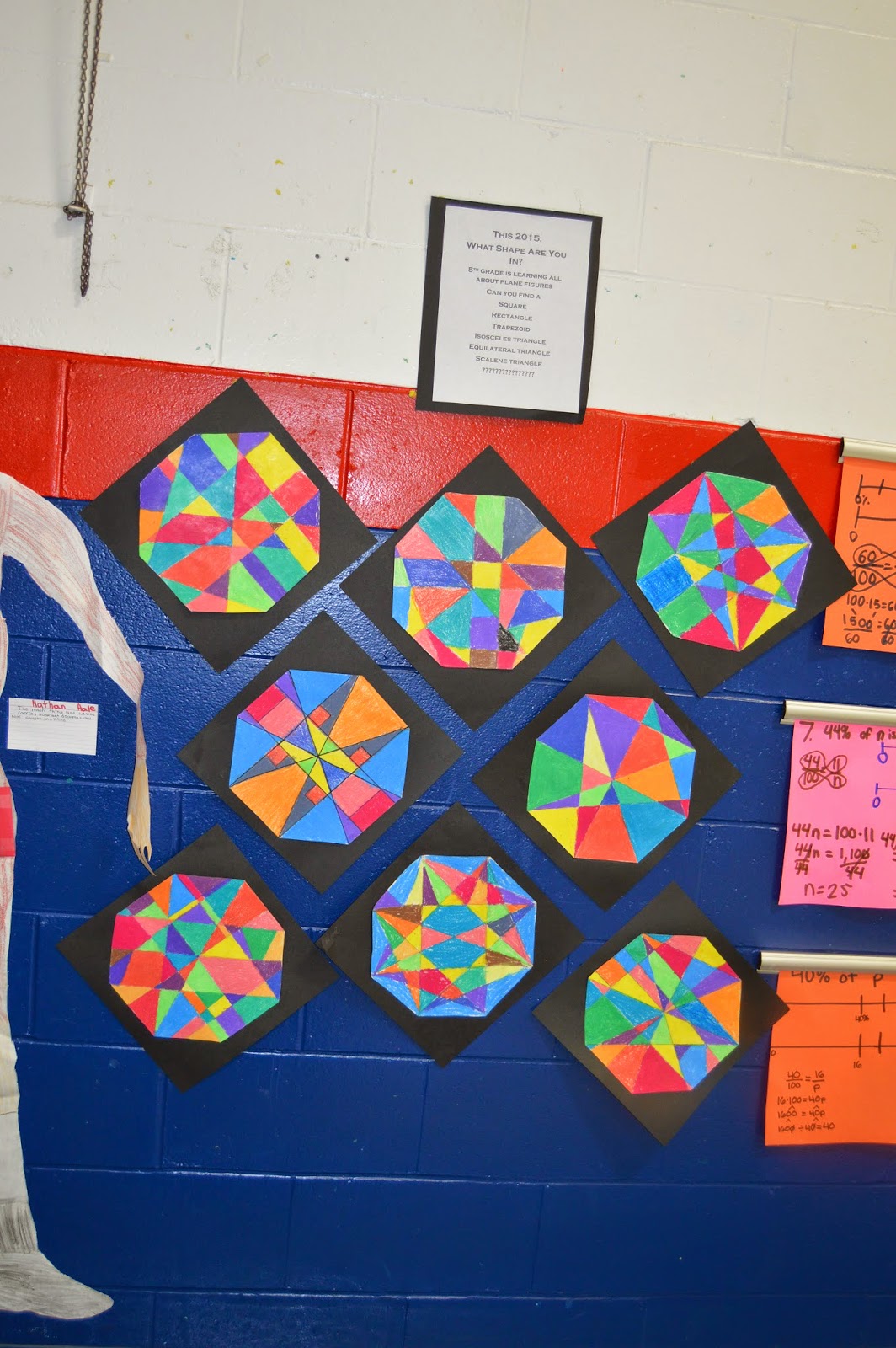 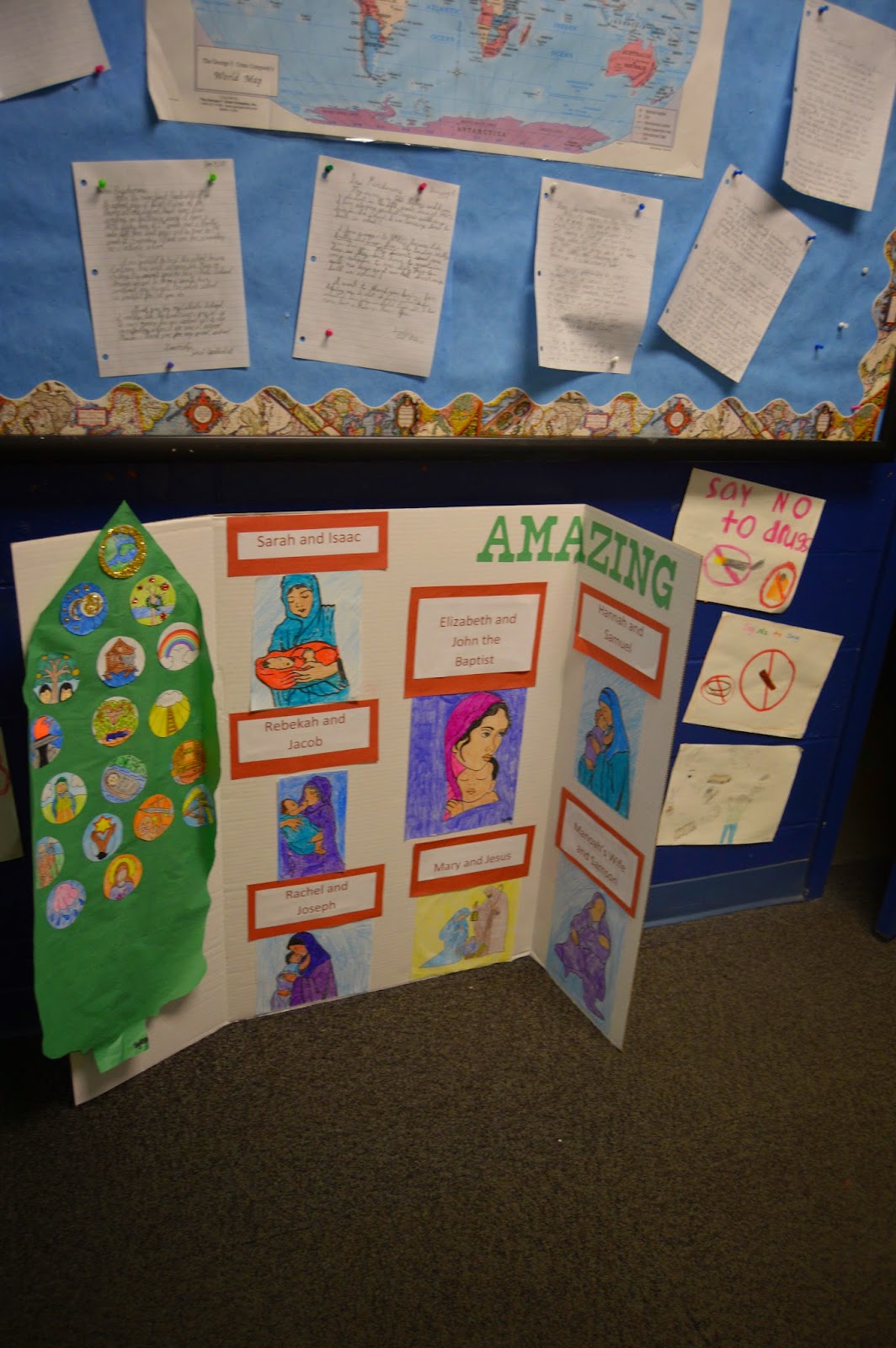 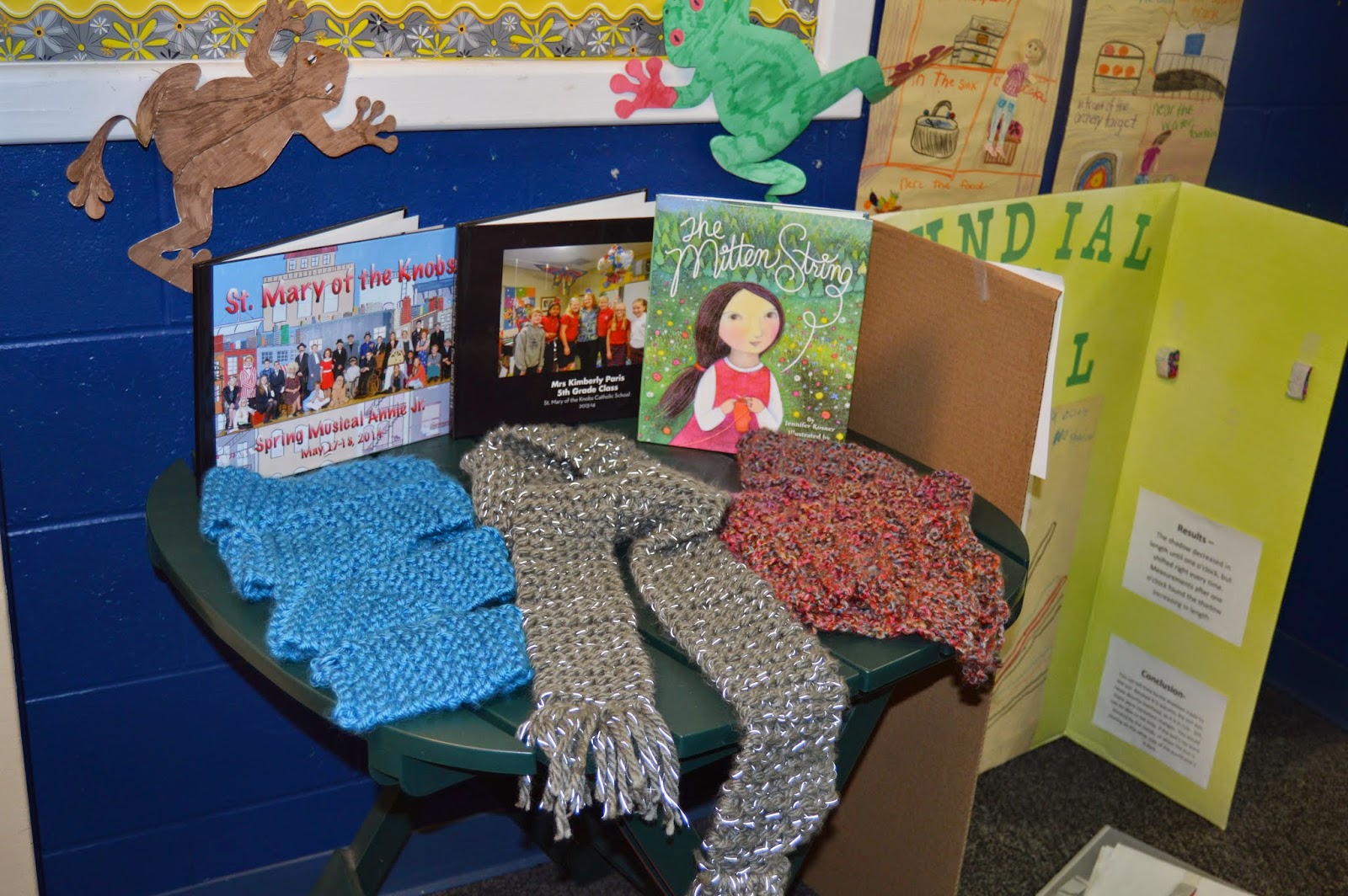 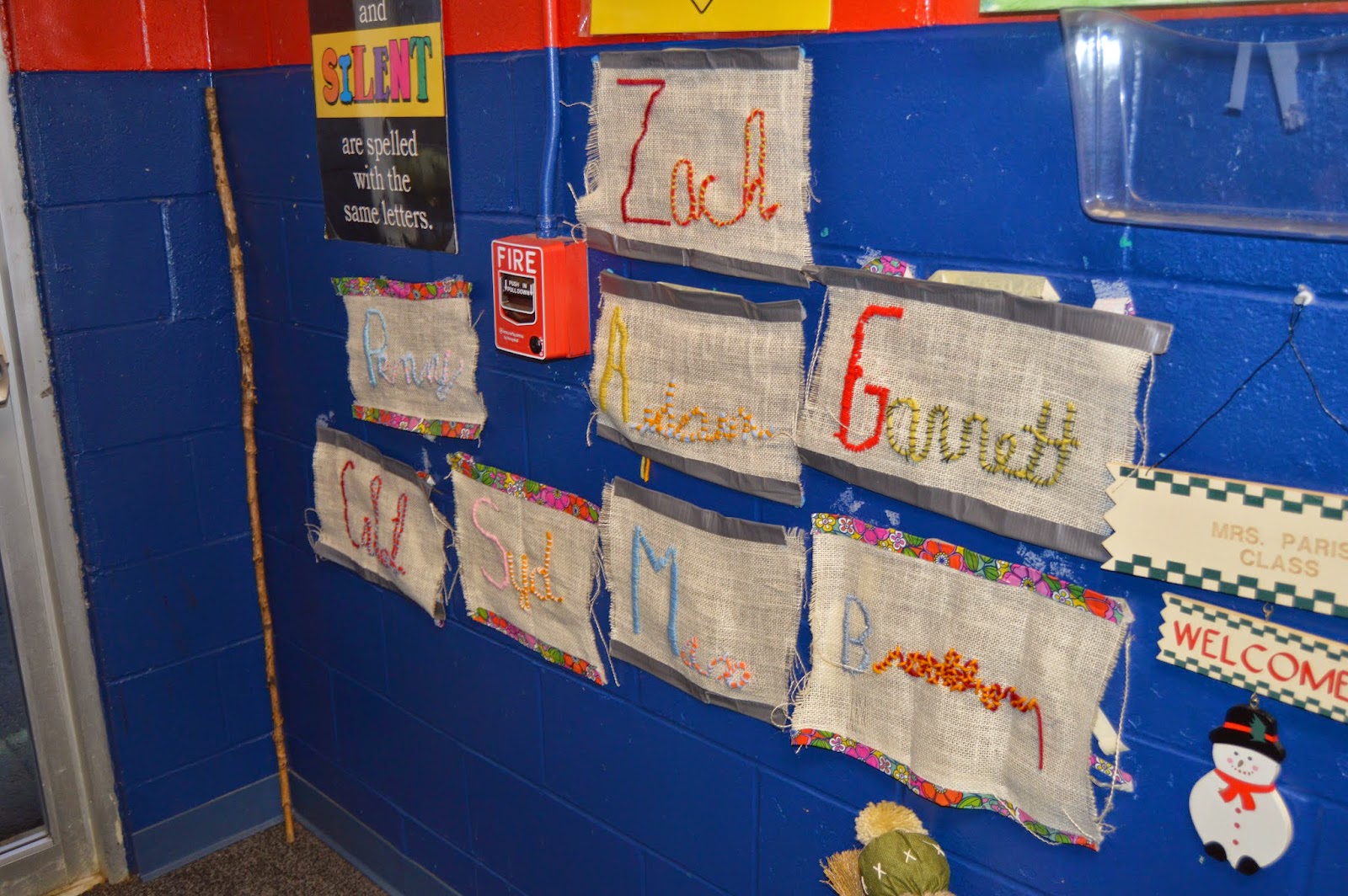 Never a dull moment in 5th grade.
In between Family Fun Night and Open House I shopped for groceries, cleaned the chicken coop and had Pam and Pete for supper. So this afternoon has been quiet. Just spending time with the Handy Man,  a big nap, working a puzzle, a little rest.
Tomorrow we're off to a new local endeavor where folks can drop any unwanted materials to be used by teachers and artists.  This is part of Catholic School's Week as a service project.  We are going to reuse materials and create beautiful Valentines for parents of very sick little ones at our local children's hospital. Then we will be watching Johnny Tremain and compare it to the book we just finished. I found a Beth Moore Bible study that I am really enjoying, to round out the day.
Off to another week, hoping it is a good one for you!

Wow, I can't believe this littlest bit is already one! So sweet to hear her new words and watch her fly across the floor and dance and dance when we sing.  She's loving up her new baby from her Grandma! 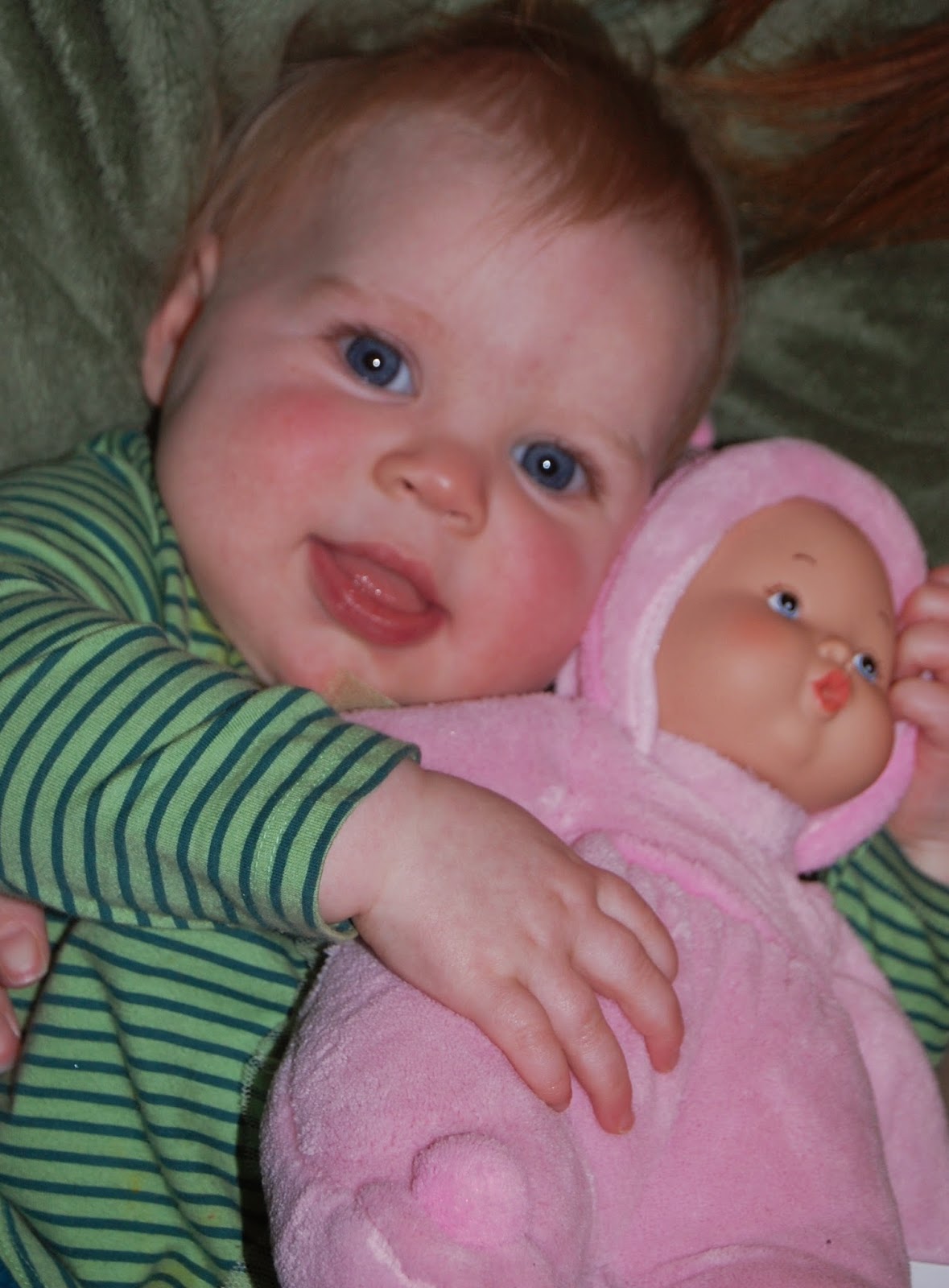 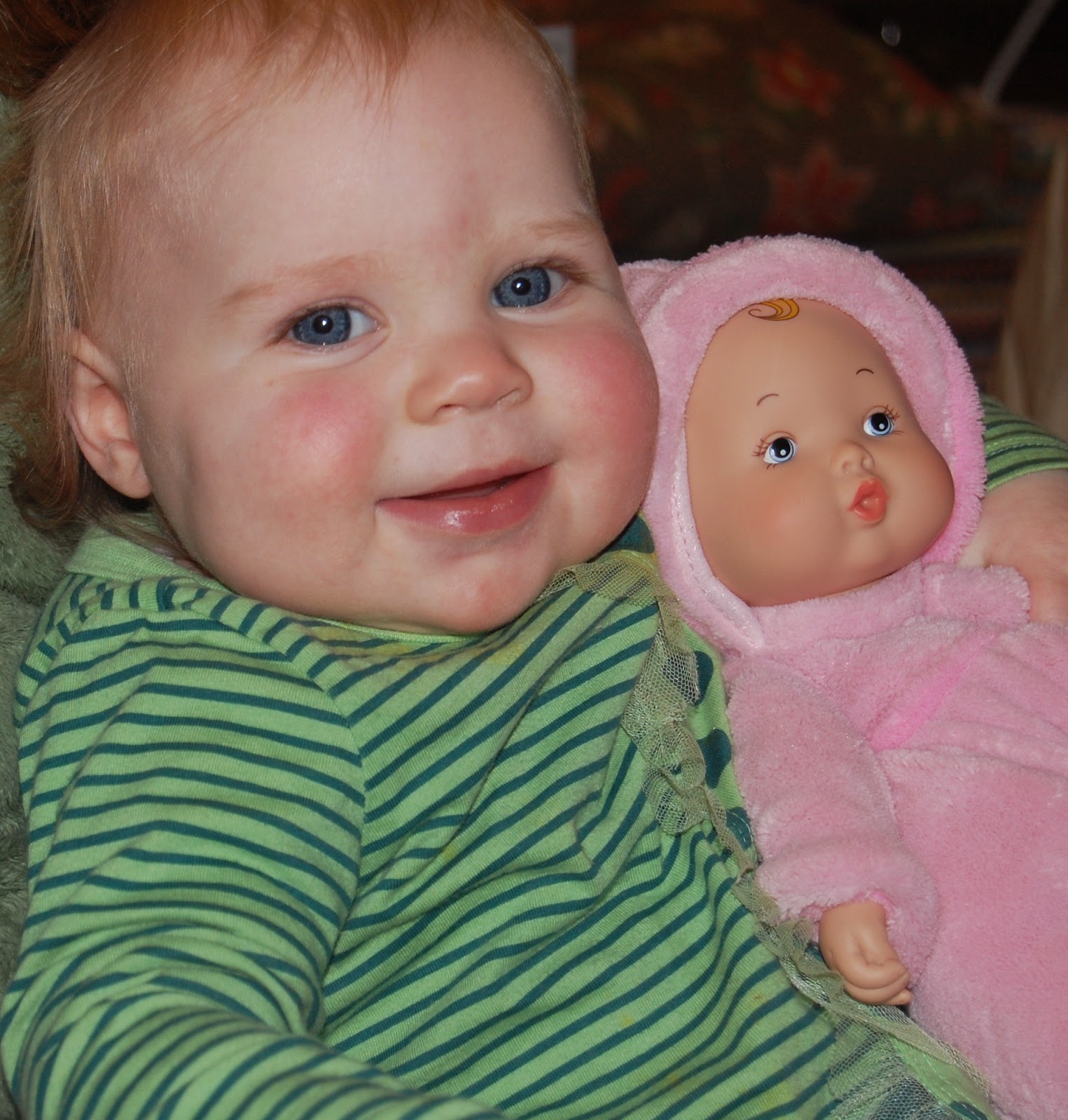 I was missing my sweeties and was happy to see Playdate come. 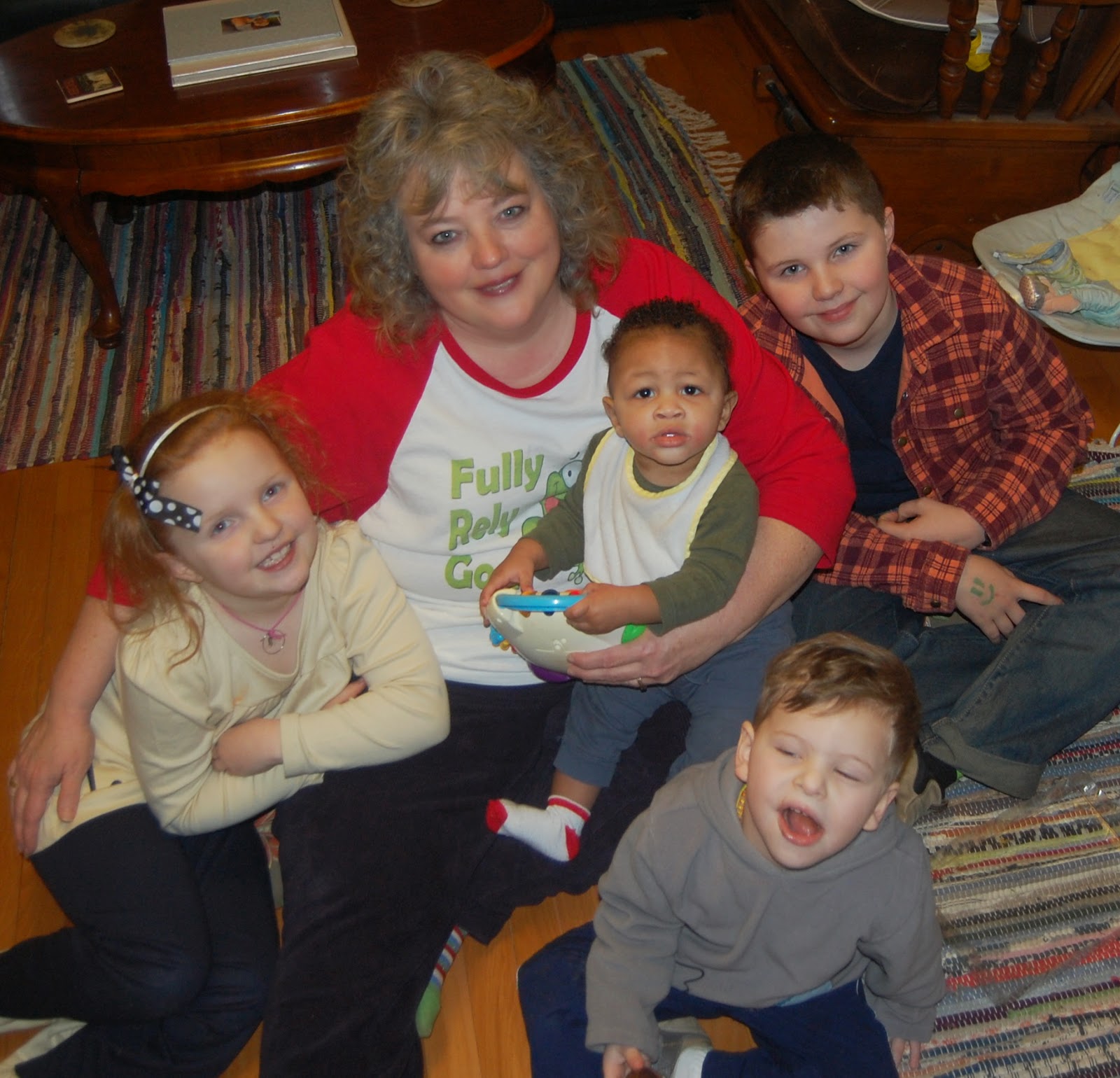 I'm going to have to change Mr. Smiley's name to Mr. Piggy.  When he sees me he wants to eat. Perhaps, because on Playdates, most of my time is spent in the kitchen.  He had blueberries, pears and celery, not good enough. I fixed him an egg yolk, then had to fix another one.


Bean was a happy boy after his great wins in swimming this weekend. 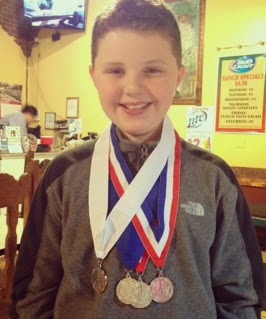 When the tiny people were gone, he wasn't  so excited that it was math time. I know you might find it surprising that I'm not happy with what he's getting in math at school, so I push a little when he's here and Missy Math Mind Bugg is picking it right up too. 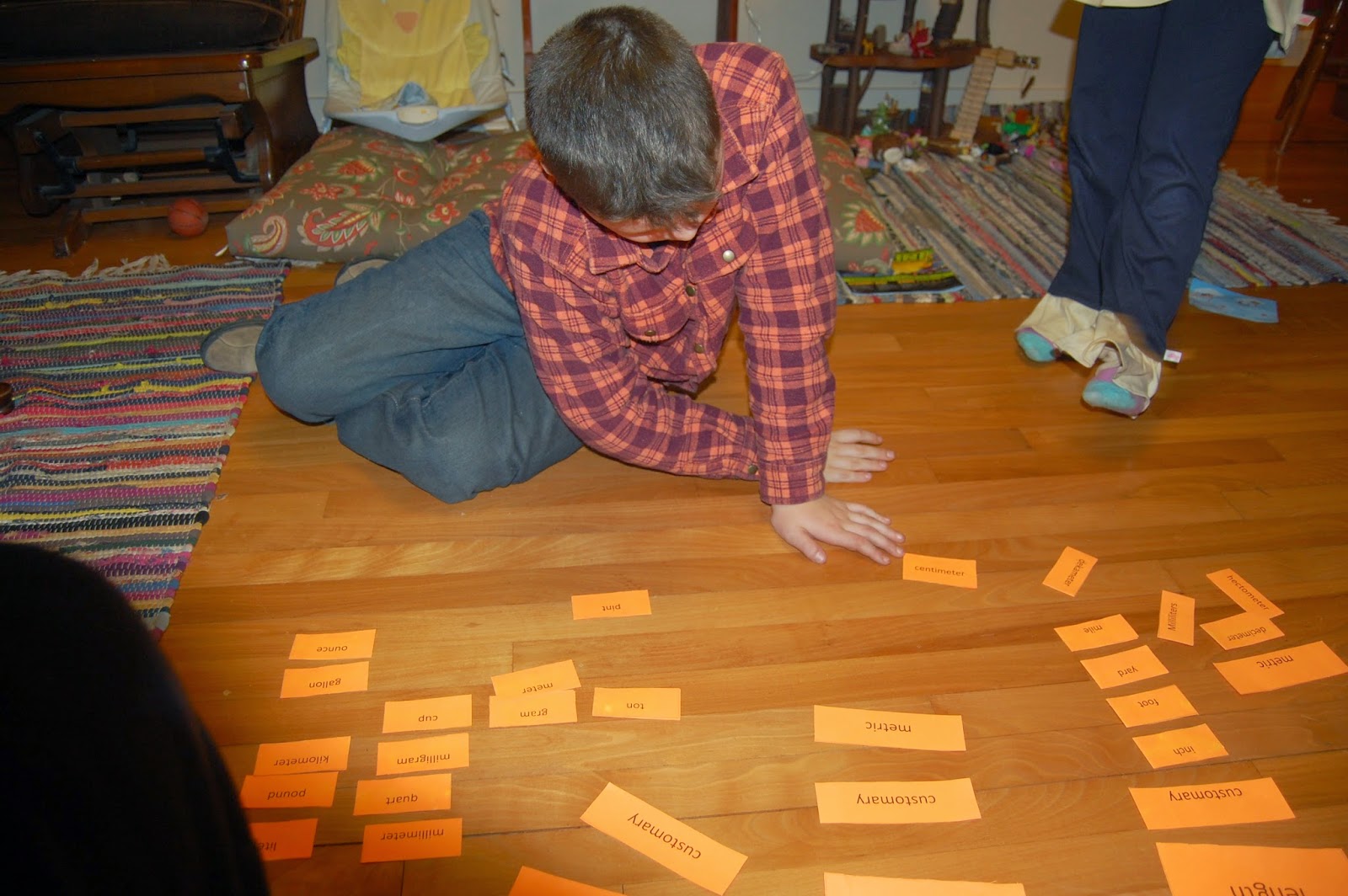 Bean and Bugg are so good with my littles.  I so appreciate how much they love their cousins.
Swee-tee and Wee Will were able to join us too.  I'm happy when they come and worn to a nub when they go, but grateful for the time we get!
Posted by Gramerly at 6:15 PM 3 comments:

It does come faster every year. We spent it much as we have since we became grandparents- trying to figure out how to last from 5 to midnight.  It was cold, but we went ahead with our bonfire. Hot dogs, Pringles and s'mores.
Still, Bean wants a story.  I had meant, through out the day, to try and find some new campfire stories, but I use this break to try and return some sense of order to my mess I call home.  It is never good with all the extra activities leading up to Christmas, but gets particularly awful when your living in a sibling health crisis/ drop everything and go situation. I had been cleaning, mostly the pantry all that morning.  Never got to the campfire stories. So, I asked them what they remembered about Daniel, as in the lion's den.  Daniel has always impressed me.  Scripture says he was smart and handsome and he was kidnapped, but wow, he kept the faith.  It reminded me of the time we decided to take the whole junior church I taught to the zoo to hear the story in front of the actual lion's den.  I thought this was a great idea and practiced giving a very stirring rendition of the story.  Never once did it dawn on my feeble brain that we wouldn't be the only ones at the zoo, and I would have quite an audience of strangers listening in.  What was I going to do? So I told my story to kith and kin alike.
Any of the gramerlings are welcome on New Year's Eve, but Bean and Bugg are the only two we have.  While I ever want them all included, when I have so many, like on Playdates, these stories and sharing of experiences just seldom happens. I'm too busy tying shoes, changing bottoms, fixing drinks, finding whatever tractor is missing, etc.  I liked having the time, though I wouldn't have minded if it were 20 degrees warmer. 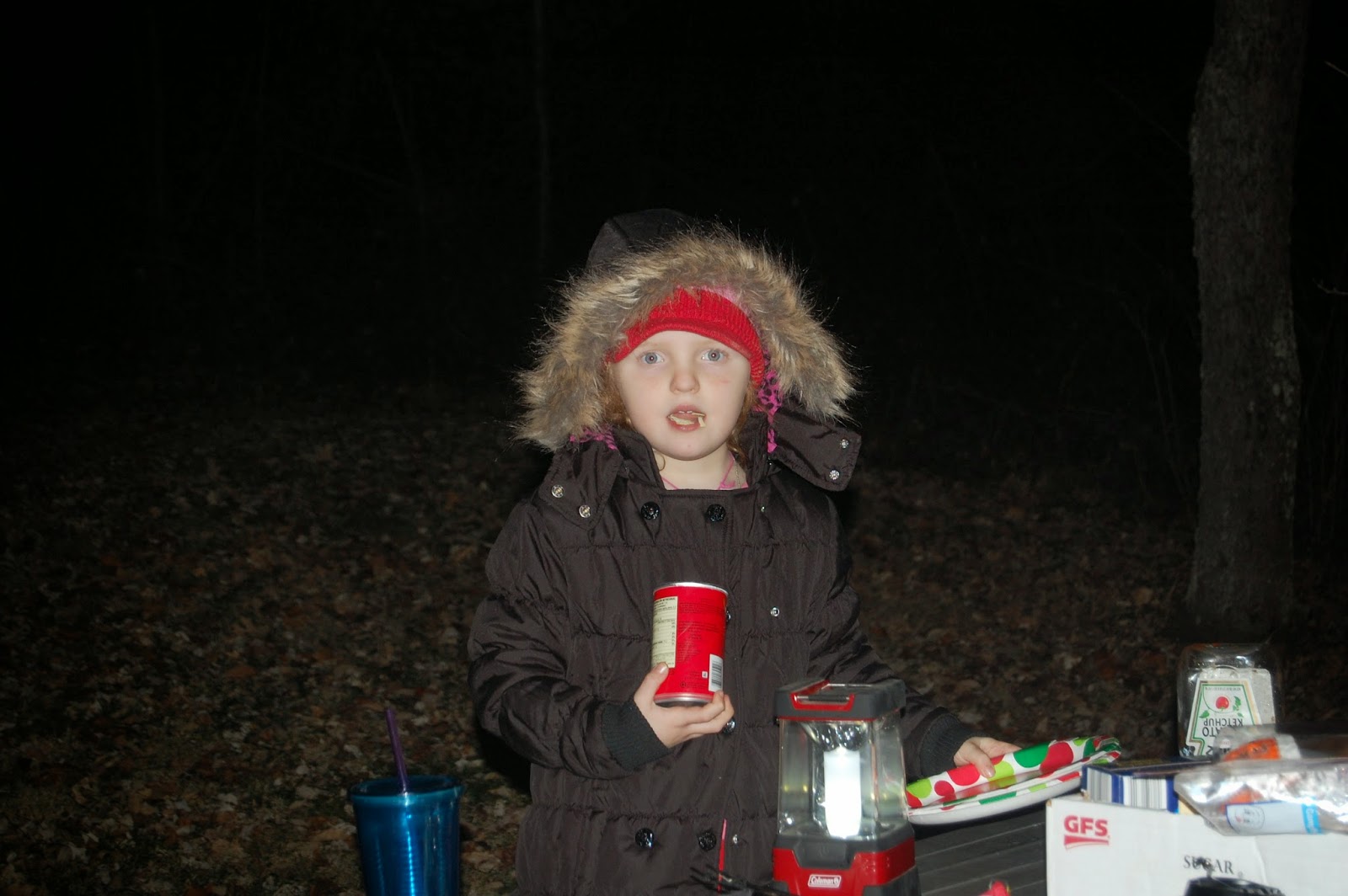 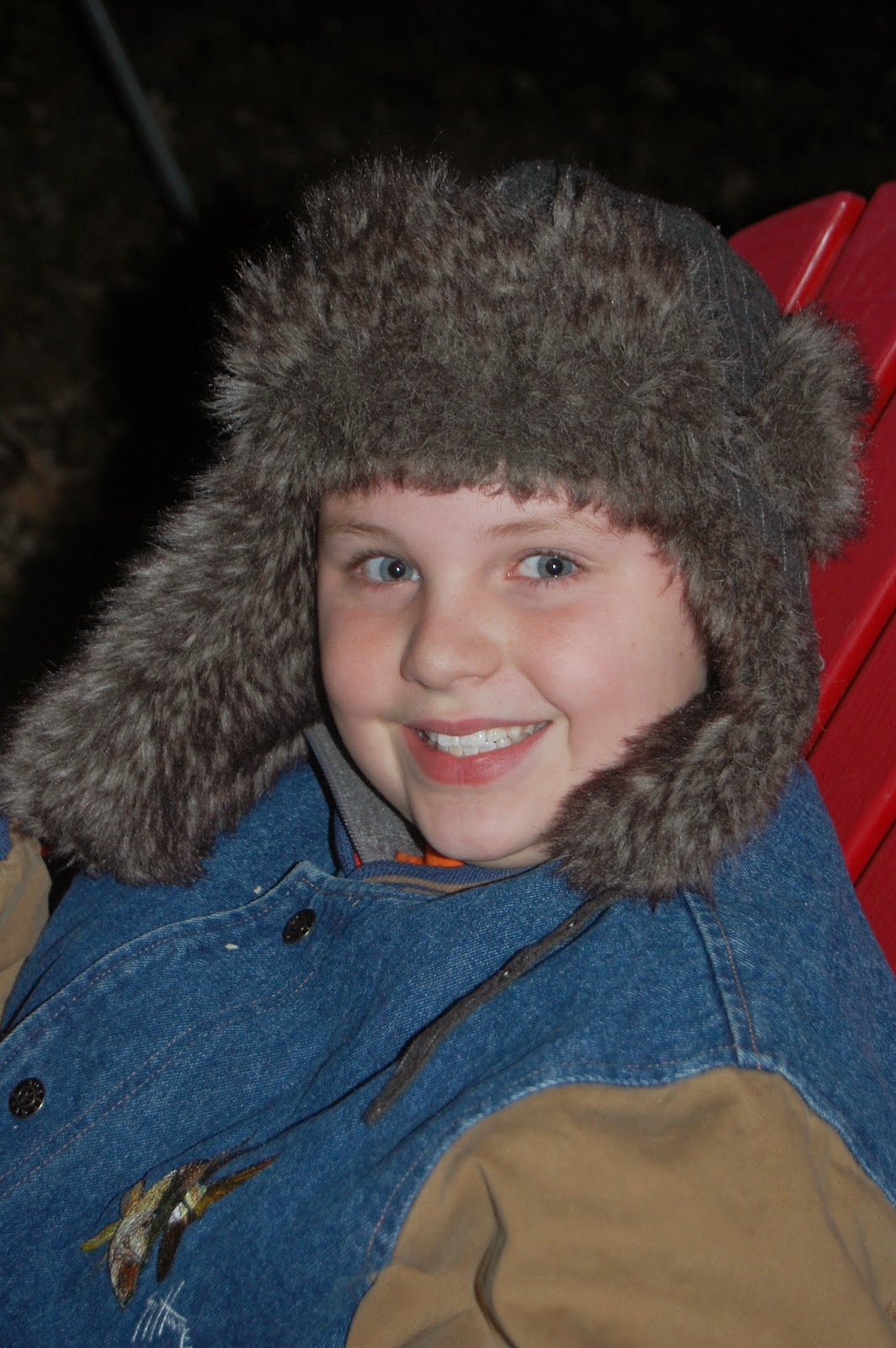 Then it was time to watch some movies.  The chicklets chose "The Littlest Colonel."  First some hot chocolate for Bugg and chai latte for Bean. When the movie was over we played games.

I picked up Tenzi during at last minute Christmas Eve stop.  I really like that game. It's easy, fast and young and old alike can play.  It is very simple, but we quickly thought of ways to change it up that added to the laughs. Next we played YamSlam.  Yahtzee was a game I never minded too much. I love this version because there is no need for paper or pencil and the dice land right in the nice felt lined box, not skittering all over the table.  We finished up with pick-up sticks.
I have a ridiculous amount of games. I ever have this delusion of everyone sitting around laughing and whiling away the evening with one game or another.  It never works out like that.  My adult children don't like games (though a couple of spouses do),  and it is so hard to find ones everybody can play.  By the time we'd done several rounds of Tenzi, then the next two, I was more than ready to move on.
So movie number two, "Heidi,"  and Jiffy Pop and we are way past all our bedtimes.  Pap worked our Christmas puzzle, and paused to indulge the princess with a silly hat and a hug. 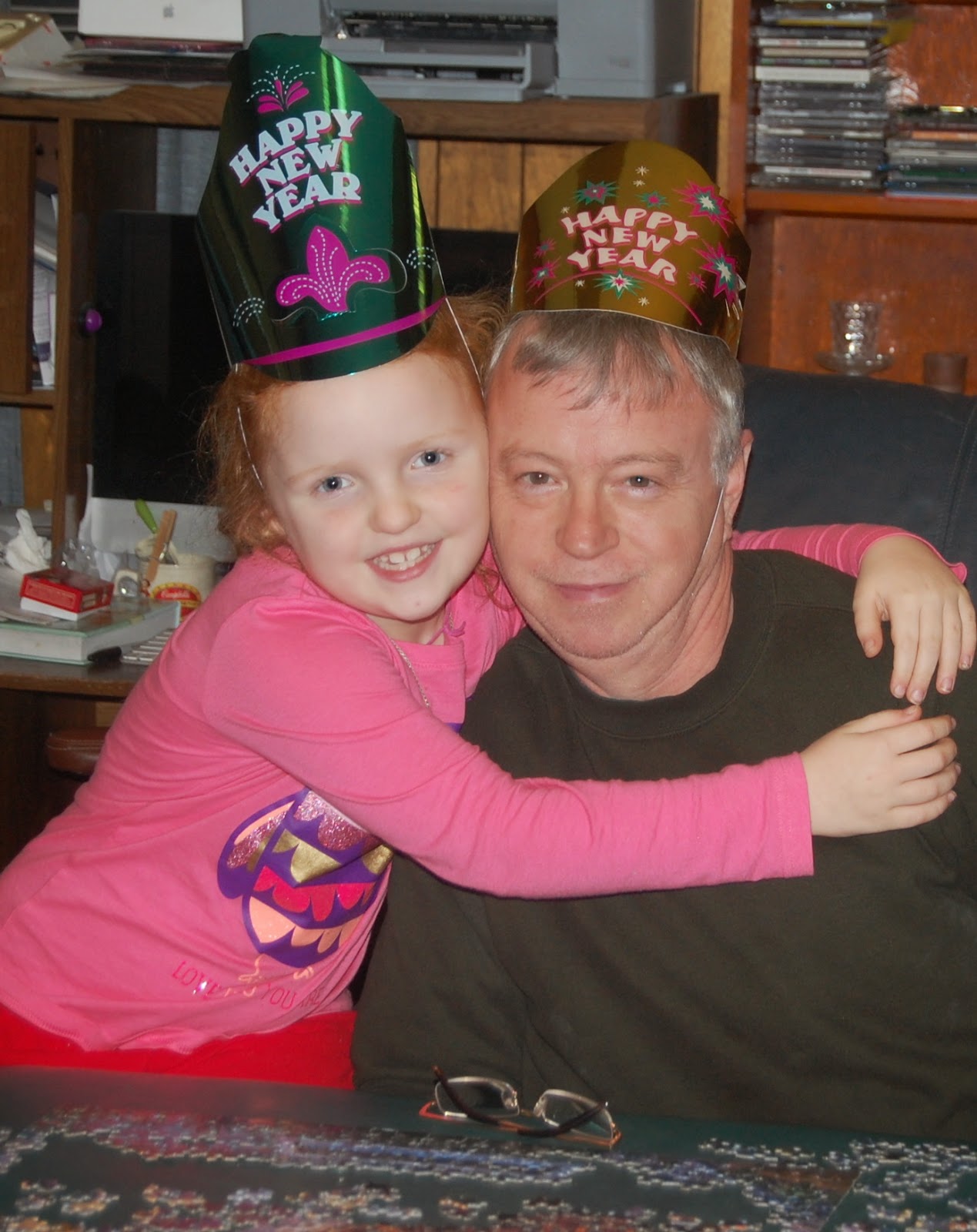 Then, finally, 2015 arrived and out we went for poppers, blowers, sparklers and trying to find the comet.
Today, Bugg was telling her Mama about trying to see the comet. Bean reminded her it was below Orion's Belt.  So she said it was under Ryan's belt.  He corrected her, "Orion."  She corrected herself to mama, "Old Ryan."  Too funny. 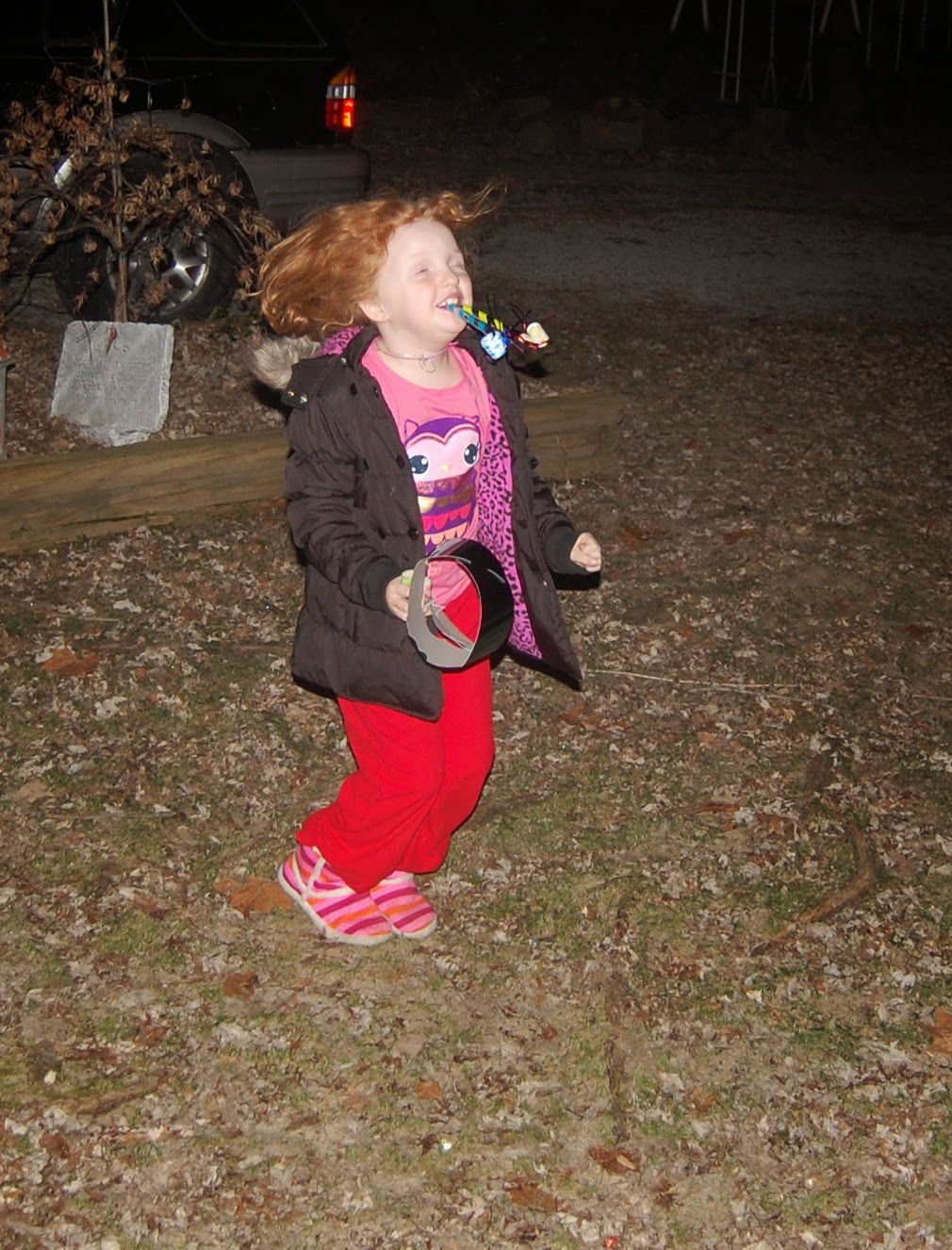 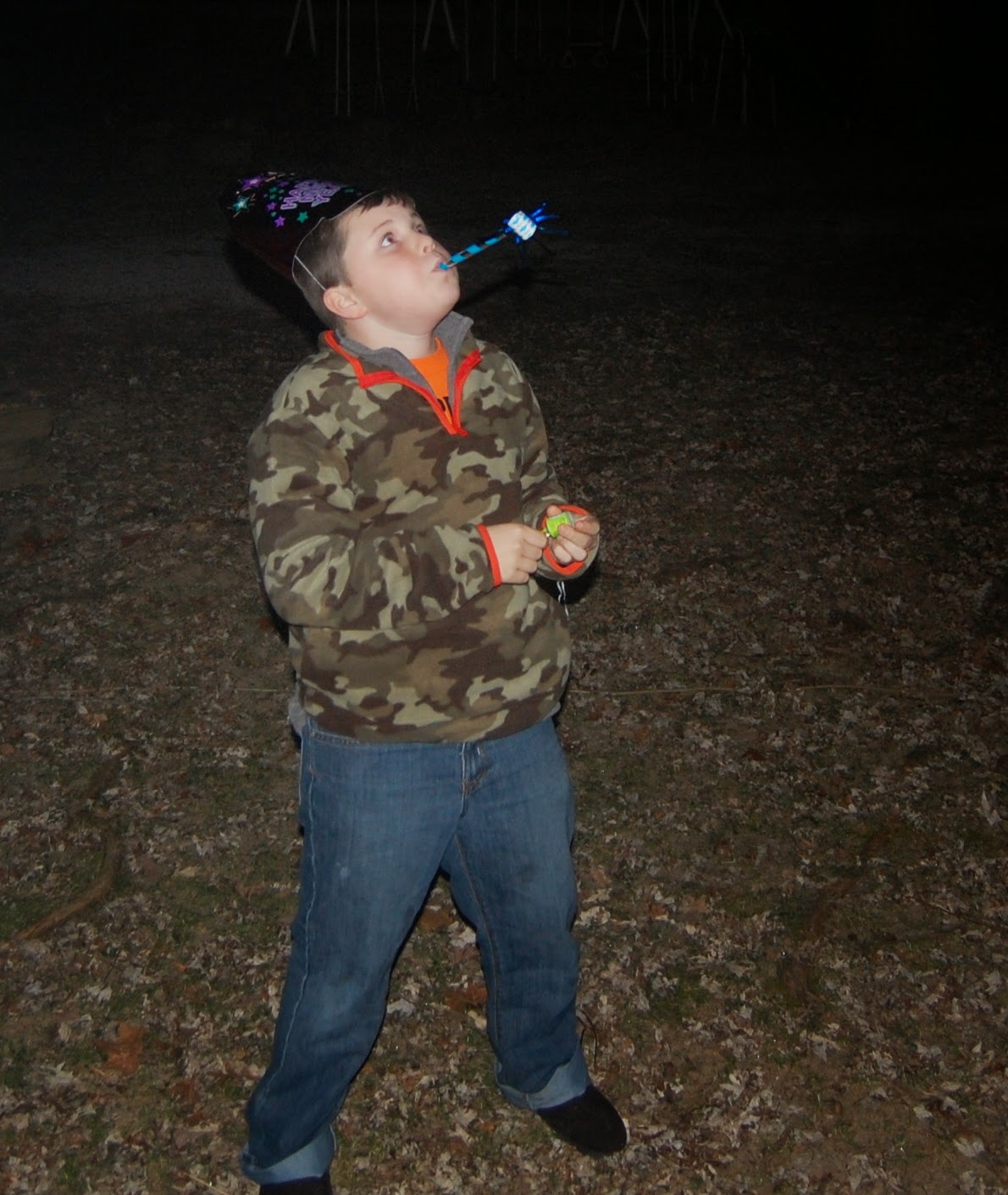 Then it was chase each other and pretend your in the last battle of the Hobbit. 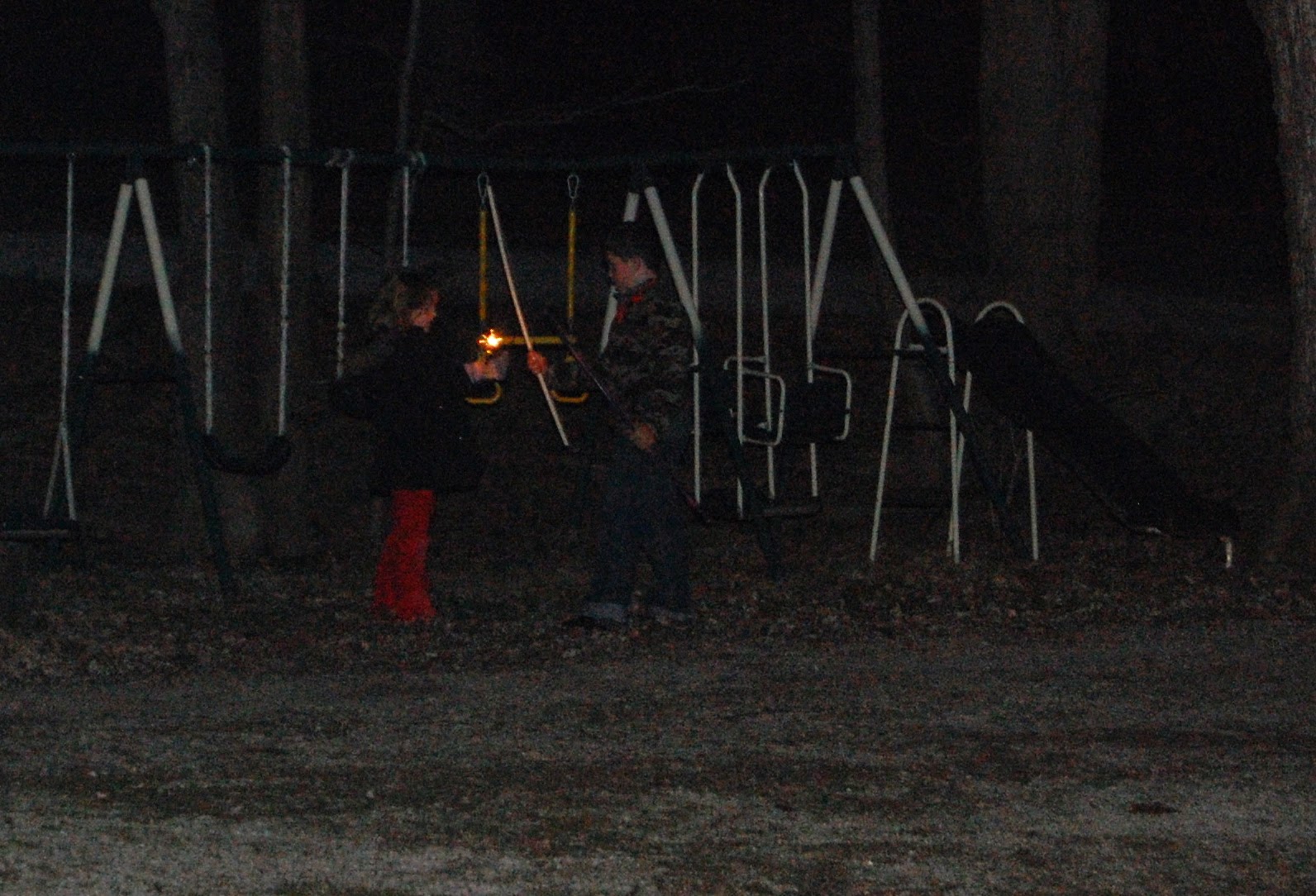 They did sleep in and I had another round of hot chocolate and their blessing gems which Bugg always calls Blessing Balls ready, as we had a new tradition to tend to. 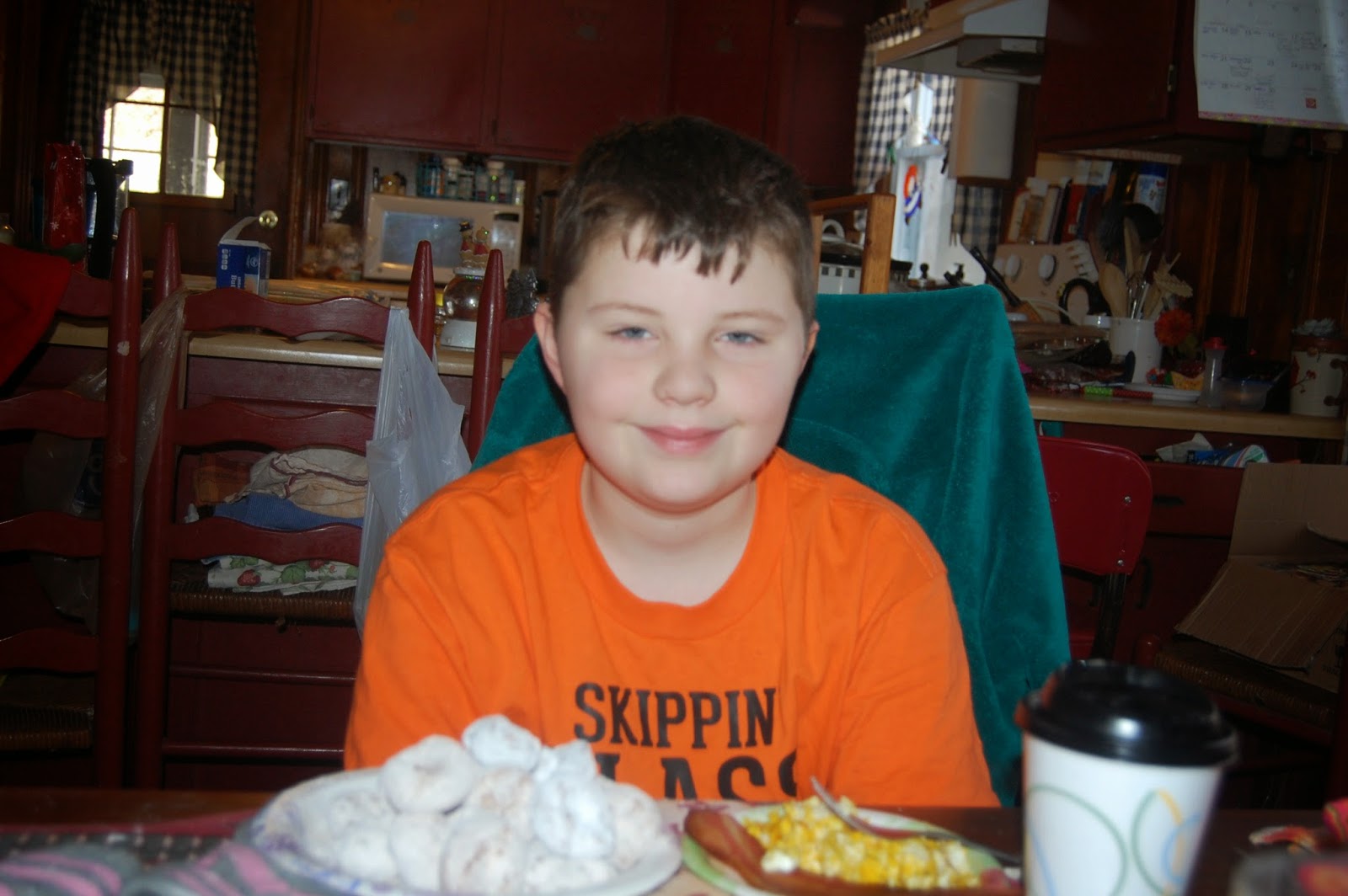 We decided to expose our littles to an exciting cultural experience - the flea market at the Convention Center.  It was fun.  Then a few family joined us for the requisite New Year's meal- corn beef, cabbage and black eyed peas.  The Captain said he didn't think it was any small feat to make those ingredients taste good, but they were dee-wish-us!
Tomorrow will be fun as Ceece and I head out for a yarn crawl and lunch with Aunt SuZQ at my favorite lunch spot, The Cheddar Box.  Looking forward to black bean ravioli and basking in all those fabulous fibers.
What did you do for New Year's?
Posted by Gramerly at 5:02 PM 1 comment: