Of late I've said I need to have business cards for my new business- Professional Mourner.  Oh my, in my circle of friends and family we've had so very many losses. Sad.

Lots of life going on all the while.

I cleaned out a hall closest and found some of my old cameras.  Perhaps I've mentioned that the loss of my first 35mm was the only material possession I ever cried over.  I was trying to talk myself into letting them go.  Instead, I recalled that bottom shelf in the bathroom and set three there and got rid of the rest.  One was Phil's grandmothers.  Mr. Smiley has been endlessly fascinated by their presence. I realized I wasn't going to get rid of them and they likely were not going to be a joy to anyone else, so  I made all his dreams come true by letting him explore them. 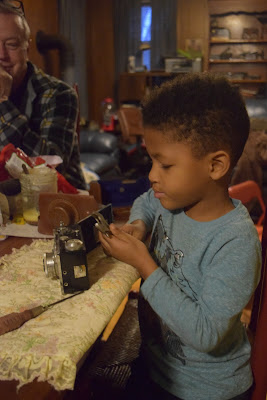 Then this week, and old CD player was gleefully taken apart. 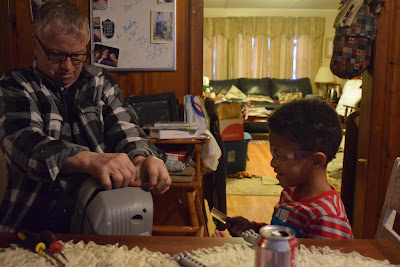 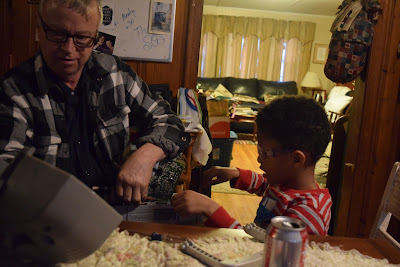 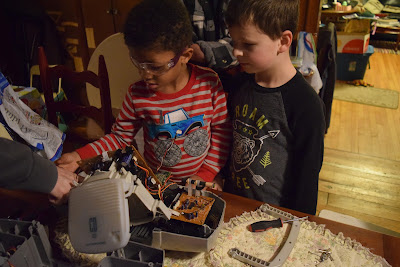 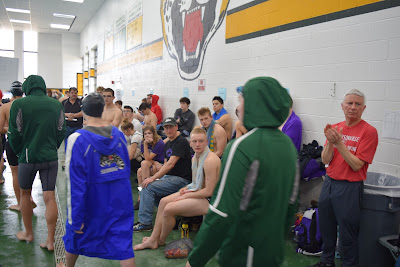 Part of his fan club.  They won the sectional, competing with twelve schools, the fourth year running.  It still is strange to me to find ourselves cheering on such an accomplished swimmer for only fourteen.  They are only allowed to swim two events. In the 200 Freestyle he came in fourth, and the Backstroke he was second.  All those first slots were taken by mostly seniors and mostly his team. 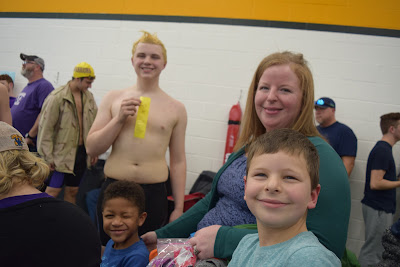 Yeah, that coming at yellow hair was a sign of green and gold solidarity amongst the team. 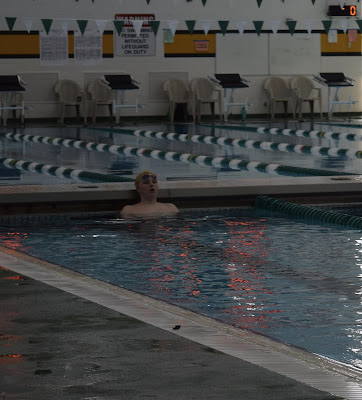 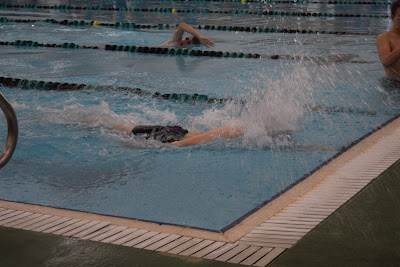 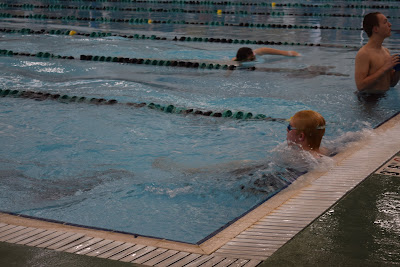 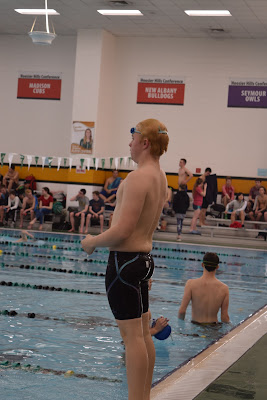 I had been pulling out every last thing in my family room, cleaning and found a couple of things they made me when they were wee and pictures of his second year.  I brought them along and he stopped for a visit between events. Sweet. 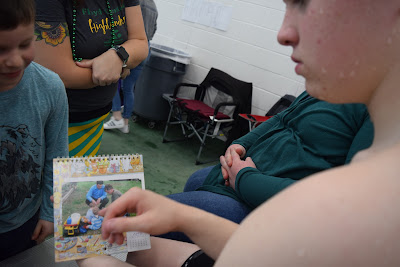 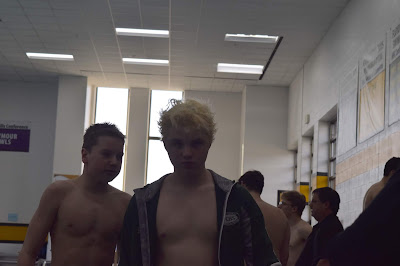 Practically since we met Mr. Smiley, he's been smitten with his Pappy.  But the last two times he visited with the Captain, he's been making friends.  For who knows why, he was fascinated by the texture of the Cpt.'s buzz cut. He talked him to taking him to the concession stand for a donut, then said, "Technically, this is  my second donut."  It was. Crack Up. 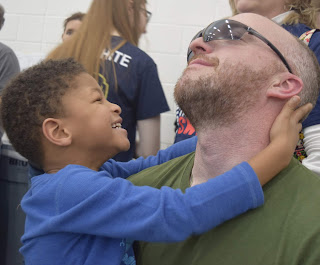 Pap was feeling a tad neglected.  Mr. Smiley finally turned loose of the Cpt. and made his way straight to his best guy. 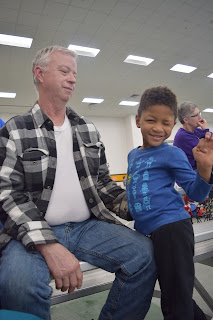 So hot in there! 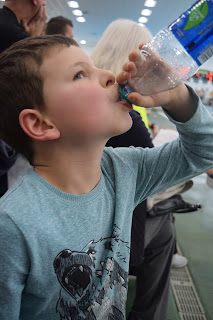 Most events had two heats.  The faster swim the second heat.  This time they played music and were announced and walked out and around the pool. 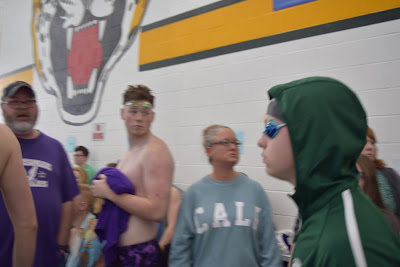 And his number one fan with her green lips  and big smile on! 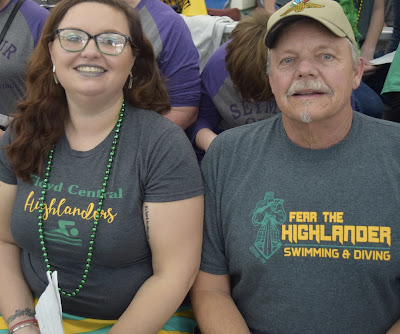 Today we had our Valentine party.  Ivonne loved this little violin. Rae has taken up the ukulele and he did not want her to stop strumming- ever. 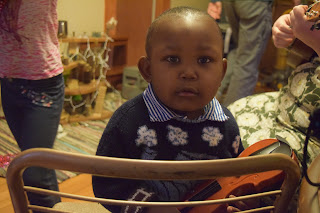 Mr. Smiley asked me was this guitar just for decoration?  Umm, pretty much it seems. 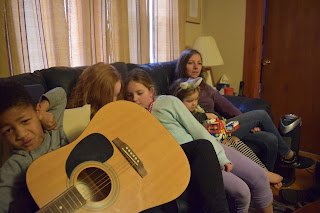 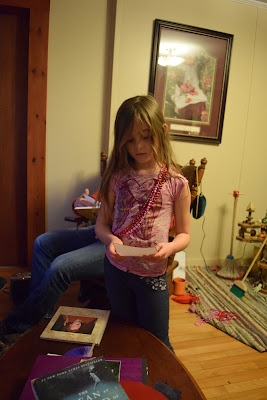 They all enjoy looking through the books that I've have made from this poor ol' neglected blog. If I keep up at this rate, it won't be much of a book next year. 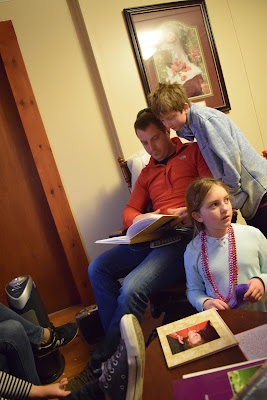 So swimming to hunting. Bean, his dad and Pap went pheasant hunting today. 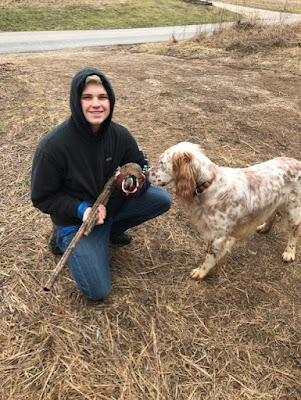 I'm tired, but as always, enjoy  my people.
Posted by Gramerly at 3:53 PM No comments: